The digital future of Asia is already here. In China, millions of people enter public transportation each day using their smartphones, emerge and pay for their breakfast with WeChat, and use an app to have their lunch delivered a few hours later.

They work at offices that are rapidly leveraging blockchain, AI, robotics, and cloud computing seamlessly around them. They book restaurants for dinner over the internet and late-night shop on the train.

Much of this has been enabled by rising smartphone adoption. For example, in 2017, Asia saw 319 million new mobile connections, compared with just 5 million new mobile connections in Europe over the same time period. Smartphone access to the region’s high-speed 4G networks has enabled Asia’s consumers to go online even if they haven’t invested—or can’t afford to invest—in fixed-line home broadband.

As this smartphone revolution transforms individuals, cultures, and societies at an unprecedented pace, the changes ahead are going to continue being remarkable. They are also going to increasingly challenge the policymakers and businesses tasked with skillfully navigating the evolving digital ecosystem. 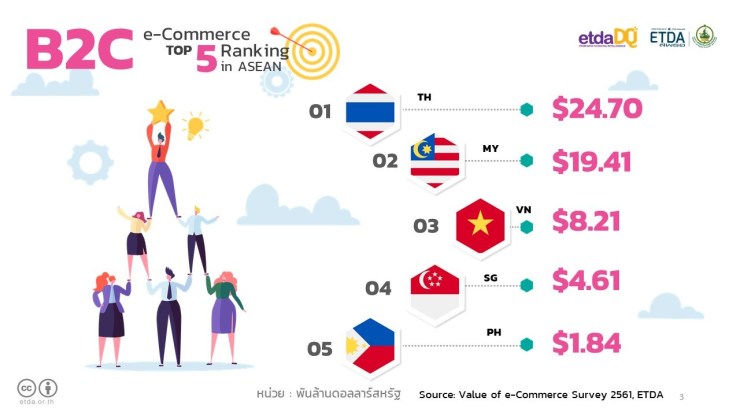 E-commerce in Asia: Preparing for the next wave of digitalization

Asia’s consumers are particularly open to integrating technology into their lives compared with shoppers in other markets. According to research firm Kantar TNS, 77 percent of connected consumers in APAC at the time of survey (2017) made their most recent purchase on a mobile, compared with 61 percent globally and 24 percent in Europe.

Asia also leads the world in online payments, according to KPMG, with an average 22.1 transactions per person annually. This compares with 19 transactions per year for the average North American.

Capital flows from investors into the region suggest that Asia’s online commerce is just getting started. Tech in Asia reported that venture funding for Southeast Asian tech startups alone more than tripled in 2017 to nearly $8 billion. These investments have contributed to a surge in the size of Southeast Asia’s digital economy—up by more than 60 percent in 2017 alone, and expected to grow from approximately $50 billion in 2017 to $240 billion by 2025.

As digitalization expands in Asia, it is swiftly dissolving the line between the physical and online worlds. Already, a woman in India may see a pair of earphones advertised in a newspaper, purchase them online, and on social media later that night, post an image of herself using them. Separating the impact of her online and offline interactions during her day is difficult and will be even more so in the future.

While tremendously exciting, Asia’s rapid digital growth places businesses and policymakers in the challenging position of needing to best leverage the benefits digitalization brings while learning how to mitigate some of its risks.

For starters, companies have to constantly seek new strategies that cut through the digital market noise. The cost of not doing so is growing as consumers become increasingly confused by all of their online choices. This sentiment can make them more reluctant to trust new businesses on the internet at a time when they are growing.

Asia’s regulators and policymakers are also focused on protecting their consumers’ data at the same time that businesses need to leverage data to best ensure consumers and businesses have confidence in their online experiences—particularly as new technologies emerge or existing channels develop in different directions.

For example, Go-Jek, Line, or WeChat—digital platforms that aggregate a number of different services into one—help companies and partners better reach and serve consumers. However, in doing so, they also introduce an element of risk; these large platforms can hold disproportionate amounts of power and control across the internet.

Uneven digital development is another concern, with pockets of the population falling behind due to being digitally under-skilled or excluded. Across Southeast Asia, more than 40 percent of the population still lacks regular access to the internet. The widening gap between the digitally native and the digitally naïve will become more and more difficult to close in specific markets as the region advances.

Learning from other regions

As policymakers in the region look to address these issues without sacrificing growth, much attention is being paid to protecting and promoting the core asset that is rising out of all of its digital development: consumer data. Asia is not alone in this point of focus. Governments around the world are creating legislation on who consumer data belongs to and how best to protect it.

However, Asia is in a unique position to observe and learn from regulations developing in other parts of the world. For example, the General Data Protection Regulation has brought about harmonization of data protection norms across Europe. It provides consumers in Europe control over their data and requires organizations to implement privacy by design in their product development process.

In contrast, the data protection landscape in Asia is increasingly marked more by the differences than commonalities. Consistency in defining the basic concepts of personal data and sensitive data and their treatment remains elusive.

While some countries recognize the need for safe and enabling cross-border data transfers, others are intent on preventing the flow of data for various reasons.

This latter strategy impedes interconnectivity between markets in the region, limits the ability for vital use of that data for things like protection from fraud, and ends up introducing more risk than it reduces.

Reducing this legislative variance is an opportunity for the region’s policymakers. They can start by committing to treating data in the same way all markets treat valuable assets—by creating methods of exchange that engender trust through transparency, consumer choice and control, security, and responsible and fair use.

Consumers also require more education on the importance of protecting their data, and about best practices for guarding their privacy online. This will help to foster digital inclusion, digital literacy, and next-generation technology skills to ensure Asia’s population continues to best use and enjoy the benefits of technology.

Finally, regulatory and operational strategies that aim to support cross-border e-commerce and data sharing can help ensure the full potential of today’s digital markets is realized across the region. For this reason, countries in Asia can also benefit from taking a collaborative approach in developing their regulatory frameworks.