Even though the trade surplus is rising, the current account surplus is narrowing this year, which suggests the Thai baht will remain an Asian underperformer over the remainder of the year

The trade slump has bottomed

A month ago, we noted that Thailand’s export slump bottomed in June. The trade data released today for July supports this view.

Although exports continued to shrink on a year-on-year basis, the 11.4% fall was much shallower than 23% YoY plunges in May and June. The outcome was better than our -13.0% YoY forecast and the consensus of -18.8%. The improvement was due to a 14% month-on-month bounce in total shipments, a second straight positive reading helped by strong gains in vehicles and parts and jewellery exports.

As for exports, two consecutive month-on-month increases are hopeful signs of the start of a recovery in imports. However, this was overshadowed by a high base effect which deepened the year-on-year import decline to 26.4% from 18.1% in June. Fuel, raw materials and consumer goods imports stood out for their gains in July.

The trade surplus more than doubled to $3.3 billion in July from $1.6 billion. This was the fourth-highest monthly surplus on record. This brings the year-to-date surplus to $14 billion, which is $9.4 billion higher than a year ago.

Net outflows on service accounts have more than offset the wide trade surplus and this has swung the current account into deficit in recent months, a trend that we expect to hold in the remainder of the year. At $8 billion, the current surplus in the first half of 2020 has more than halved from a year ago. We anticipate the annual current surplus this year to be equivalent to 3.4% of GDP, down from 7.1% in 2019. 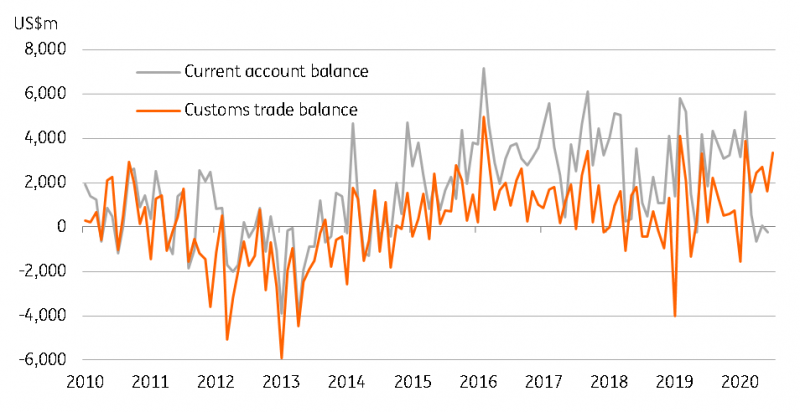 While a rising trade surplus is no relief to authorities worried about the strong currency potentially threatening the recovery in exports and tourism, they should take comfort in a narrowing current account surplus, which should act as a headwind to currency appreciation this year.

The Thai baht has been an Asian underperformer so far this year with a 5% depreciation against the US dollar. We see it holding on to that position over the remainder of the year. Rising political risk amid ongoing anti-government protests is an added hit to investor confidence in this currency unit.

That said, our end-2020 USD/THB forecast is 30.8 (spot 31.56), which rests on expectations of broader USD weakness rather than local currency strength.